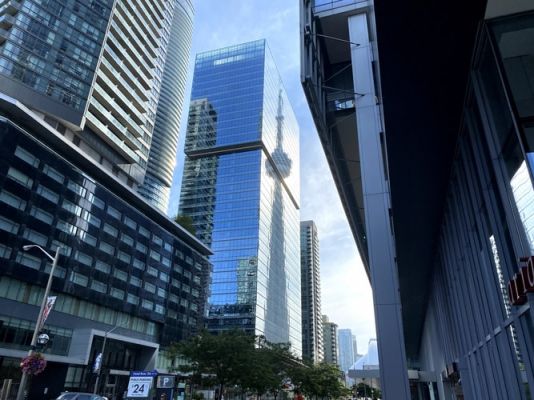 One of Canada’s frothiest market indicators surfaced — rents are rising with vacancies. Canada Mortgage and Housing Corporation (CMHC) data from their 2020 rental survey shows a sharp uptick in vacancies. Normally this is expected to bring prices down, but not in a property bubble. Rental prices continue to rise along with increasing vacancies. In some cases, multi-decade highs for rental vacancies are seeing price growth accelerate.

Toronto rental vacancies saw a fast jump, pushing to the highest level in over a decade. The rate of primary rental vacancies reached 3.4% in 2020, an increase of 126.7% from the year before. This is the highest vacancy rate since 2005, and the biggest jump since 2002. A whole generation of the city has never seen vacancies this high. About 1 in 29 apartments were sitting empty at the time of the CMHC’s survey.

The rate of rental vacancies, compared to the annual change in price for Toronto.

More empty apartments didn’t stop rental prices from climbing though. The average price of a rental apartment reached $1,536 per month in 2020, up 4.85% from the year before. Annual price growth was around 50% higher than the median over the past 10 years. More vacancies didn’t just fail to stop prices from rising. Price growth accelerated as more apartments sat empty throughout the pandemic.

Vancouver’s notoriously tight rental market hasn’t been this well-supplied in decades. The apartment vacancy rate reached 2.6% in 2020, having increased 136.36% from the year before. It was the largest single-year increase since 2009, and put the rate at the highest level since 1999. Vancouver hasn’t seen this many vacant apartments in over two decades of data.

The rate of rental vacancies, compared to the annual change in price for Vancouver. 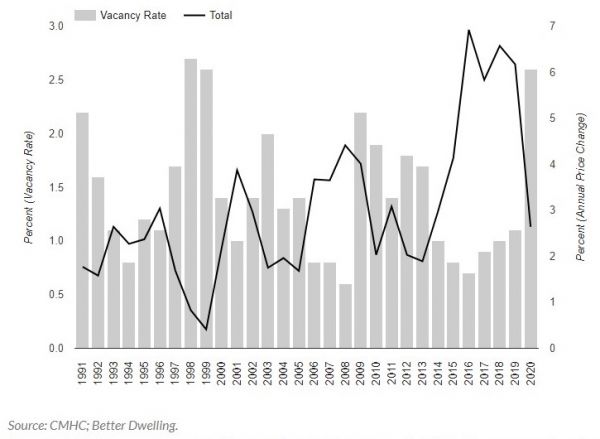 Nope, that didn’t cause prices to fall either — although it slowed growth. A little. The average price of a rental apartment reached $1,519 per month in 2020, up 2.64% from the year before. The prior two years have seen over 6% annual growth, respectively. It is slowing a little, but it’s also larger than target inflation.

Montreal Rental Vacancies Jumped 80%, While Rents Grew At The Fastest Pace In Over 2 Decades

Montreal apartment rentals made the largest increase the city has seen on record. The vacancy rate hit 2.7% in 2020, up 80% from the year before. Montreal hasn’t seen decades of low inventory like Toronto or Vancouver though. It was last at this level in 2017.

The rate of rental vacancies, compared to the annual change in price for Montreal. 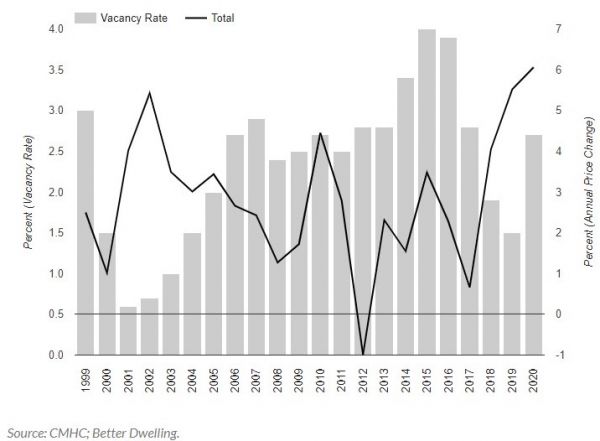 Montreal’s rising vacancies didn’t slow rental prices. In fact, they actually accelerated as vacancies climbed. The average price jumped to $892 per month in 2020, up 6.06% from a year before. It was the largest price increase ever, following the largest vacancy increase ever.

It’s commonly accepted wisdom that more supply means lower prices. It’s simple — you build more, and then prices fall because of vacancies. Except in a property bubble.

Vacancies are at a multi-year high, while rental price growth even accelerates. In a speculative environment, fundamentals play little to no part in rising prices. Further deterioration, therefore, has little impact on the direction they’re heading. When the value of buildings rises more than the rent people pay, who cares if they sit empty? The value of the property increased by more than the median household income for these cities.

Photo By: Kunal Chawla via Unsplash