TORONTO -- Rental prices in Toronto are slowly picking up for the first time in more than 14 months amid the COVID-19 pandemic, a new report has found.

Rentals.ca and Bullpen Research and Consulting captured the new figures in an April report, which examined how rental prices are changing in cities across Canada.

“The most notable change in the data from the chart above is the month-over-month increase in rent in Toronto,” Ben Myers, the president of the Bullpen Research and Consulting said in a statement accompanying the report.

The report showed the increase in the average rent prices from February to March in Toronto is quite small at 0.3 per cent, but it marks the first increase seen in more than a year.

The report said that Toronto has seen an annual decline in average rent of 18.7 per cent – the highest in all the cities examined across the country.

The downtown area of the city was hit especially hard with decreases of 20 to 25 per cent annually, the data said. The Greater Toronto Area saw some declines as well. The southern portion of York Region faced declines of 11 to 20 per cent.

The report found rent prices are picking up in Toronto, as well as Vancouver and Montreal, which have also increased in March over February for the first time this year. 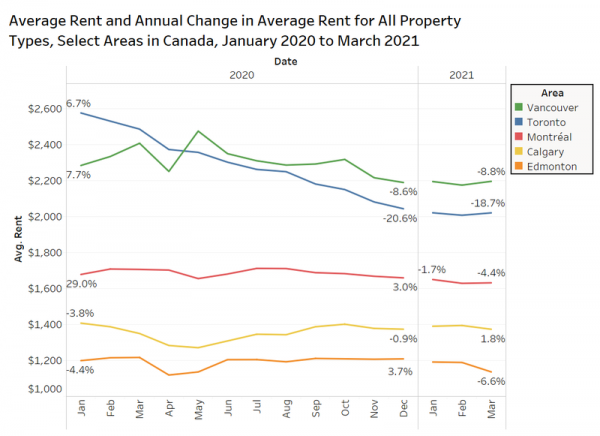 The report said a number of factors might have affected the decline in rent prices, including a larger number of smaller condos now available for rent in Toronto that are bringing down the average rent prices.

These units, the report said, have experienced less demand with more people working from home and focusing on leasing larger units. More people are also opting to buying a home than renting due to low interest rates.